Skip to content
During the first three months of the year, coffee exports from Central American countries totaled $747 million, 17% less than what was reported for the same period in 2018.

Figures from the Trade Intelligence Unit at CentralAmericaData: Click to interact with graphic 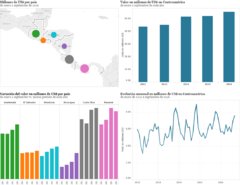 Explore data in the interactive chart.

Honduras, Main Seller
In the first quarter of 2019, the main coffee exporter in Central America was Honduras with $323 million, followed by Guatemala with $185 million, Nicaragua with $130 million, Costa Rica with $75 million, El Salvador with $32 million and Panama with $2 million.

Variation in Regional Exports
Between the first quarter of 2018 and the same period in 2019, the value exported from the region fell 17%, from $894 million to $747 million.

The year-on-year contraction in sales in the first quarter of 2018 is partly explained by the behavior of exports to Belgium, which fell from $141 million to $76 million.

Export Prices
Largely because of international grain prices, in the last seven years the average price of regional coffee exports has shown a clear downward trend, from $4.72 per kilo in March 2012 to $2.54 in the same month in 2019.

Destination of Exports
In the first quarter of the year, 35% of the value exported from Central America went to the U.S., 15% to Germany, 10% to Belgium, 6% to Italy and 4% to Japan.