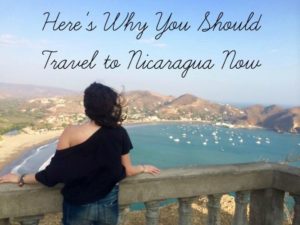 t’s morning in Nicaragua and I am staying at the Mango Rosa Hotel with my Under30Experiences group trip. Our hotel is a collection of modern cabanas surrounded by jungle and apparent nothingness as far as the eye can see. The open space, the silence interrupted only by birds or monkeys, the heat that hugs you like a warm embrace; it’s a far cry from New York City.

To be honest, I hadn’t thought much about visiting Nicaragua. On my long list of countries to one day see, Nicaragua was somewhere in the bottom–namely because I knew little about the country and hadn’t given it much thought. When my plane touched down on the tarmac in Managua, I had zero expectations for my upcoming trip beyond sun, sand and beach. Over the next few days, I would realize how rich and vibrant Nicaragua is; how friendly the locals are, how stunning the scenery can be, how remarkably beautiful yet underrated it all was. I’d quickly see how Nicaragua is like the overlooked cousin to Costa Rica; how it’s a country that is just as lush and magical sans the fanny pack toting tourist crowd. In short, I’d realize that Nicaragua’s days of flying under the radar are surely numbered. Here’s why.

When I arrived in Nicaragua, it was after 15 days of traveling through Europe that had left my bank accounts cringing. While I can’t say I regret a single moment (or cent) spent in Europe; admittedly traveling to not one, but three of the most expensive cities on earth (Venice, Paris and Rome) had left a hell of a dent in my wallet. When I arrived in Nicaragua, it was like a breath of fresh air for my finances. Not only could I travel to a new country, but I could do so on a budget! Since Nicaragua is a destination that is still considered “off-the-beaten-path,” its prices have yet to rise due to any influx of tourism. In short, book your trip now.

Ever seen a volcano? In Nicaragua you will.

Nicaragua is known for having many volcanoes (more than 18 active and extinct currently listed). Most of the volcanoes flank Nicaragua’s western coast by the North Pacific Ocean, with each one seemingly beautiful in its own right. While seeing an active volcano is a surreal experience in itself, Nicaragua kicks that up a notch with volcano boarding. The most popular slope to board down is Cerro Negro near Leon in Western Nicaragua, where adventure junkies wear helmets, pads and will grab a thin metal or wooden board and slide down the volcanic ash slopes.