This article is online and in Spanish so we have translated it as best we can below.

Please click here to access the original post (in Spanish)    There are some great images here and, if you do understand Spanish, there are some interesting audio files.

The natural phenomenon Eta that entered Nicaragua turned into a category 4 hurricane left fatal victims in its wake, and destruction of housing and road infrastructure, but also caused crop impacts.

Alvaro Vargas, president of the Union of Agricultural Producers of Nicaragu 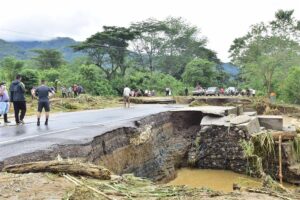 a (Upanic) detailed to Radio Corporación that they do not yet quantify the losses, but there is certain that the damage was severe.

Rice was one of the most damaged items to be in full harvest, as well as vegetables, beans, coffee, among others.

Vargas explained that in the case of peanuts the producers are waiting for time because of the process involved in growing it.

Livestock activity was also splattered by the passage of Hurricane Eta. The farmer disclosed that milk was not achieved in certain areas due to poor road condition. “Streets broke in the Sector of Rio Blanco, Mulukuku, Siuna and other productive stretches were damaged,” he said.

At least 30 per cent of milk has been no longer collected in each department or area in the last week and the problem is expected to continue as the rains continue.

Some farmers with fields such as cane benefited from relentless rains. Upanic’s president added that rainfall was positive for banana and banana producers.

Eta continues to circulate on the west coast of Florida, USA and is expected to become a Hurricane on Tuesday.

Importantly, the U.S.-based National Hurricane Center, NHC, reported that the chances of a tropical cyclone forming again in the Caribbean increased to 50 percent.