Nicaragua’s magical coast is where this travel writer plans to gather friends and clear her head post-pandemic.

Surfing is a freedom I never imagined could be taken away. After all, that’s why many of us fall in love with the sport in the first place. To paddle out into the vast expanse of ocean is freedom in its purest sense. You leave behind your worries and stress, not to mention your iPhone and the inescapable news cycle back on the shore. You’re able to truly disconnect. You find yourself humbled by the power of the ocean as it surges beneath you. You lose yourself in the thrill of riding across the face of a wave. You marvel as a glistening backspray showers down on you as you paddle out over a fresh set. 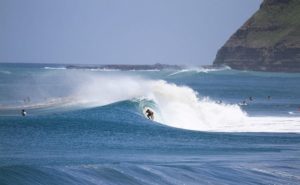 I’ve watched in disbelief these past few months as the ocean has been deemed off-limits to surfers in Spain, South Africa, Brazil, and beyond. Surfers in Los Angeles are getting $1,000 fines, and one at Playa Hermosa in Costa Rica was shot at by a police officer as he got out of the water. Just as Africa depends on safari-goers to support its conservation efforts, the ocean relies on surfers to be some of its biggest stewards. (See: the Surfrider Foundation’s 2019 victories; the World Surf League’s philanthropic initiative, PURE, which works in conjunction with Columbia University’s Center for Climate and Life to support research on ocean health.)

I’m blessed to live in Maui, where surfing is not just a sport—it’s deeply ingrained in Hawaiian culture, having been brought over from ancient Polynesia and embraced by alii, Hawaiian royalty. Throughout the pandemic-induced lockdown, the Hawaiian government has allowed surfing to continue, and locals are taking full advantage of the lack of foam-top-riding “kooks” (people who have no idea what they’re doing in the water), often tourists, dropping in on their waves. Although, with tourism down 95% in some cases and 1 in 3 workers having filed for jobless claims, leaving little else to do but surf, breaks here feel more crowded than ever—even with social distancing.

For me, surfing has always been about more than a physical thrill. It’s been about the search and sense of discovery in a time when everywhere feels discovered. From the remote icy waters of Easter Island to the barreling waves of the Azores, I’ve angled for writing assignments that have taken me to destinations with still-under-the-radar surf. So as I patiently wait my turn in the lineup, I can’t help but get wistful for Nicaragua, where a dozen people in the ocean is considered a crowd.